I remember when she first found out her diagnosis; it was my birthday last year and I had taken the day off work to go with her to see the consultant. Although we didn’t talk about it that day, we all knew what might be on the horizon even at that very first moment. I know Mum was scared, but I kept as positive as I could.

For those that don’t know, Mesothelioma is – almost always – caused by asbestos (something confirmed in my Mum’s case last week by the Coroner). The thing is, she never worked with asbestos or even knowingly came into contact with it at any point in her life. We believe her exposure actually occurred many years ago when she was still at high school.

It’s a fickle beast, cancer. Some people smoke 40 cigarettes a day for a lifetime and live to 90 years old. Some people, back in the 60s and 70s, would have regularly returned home from work covered in asbestos fibres and yet never caught so much as a cough. Some people, however, can come into contact with air-born asbestos maybe just the once – 20, 30 or 40 years ago – and have a very different outcome.

My Mum kept a diary during her illness; documenting every pill, every needle, every pain and every discomfort. One of the things she wrote was that she knew she’d “never make old bones”. It’s something my sister Leala used to say too – in different words, but something she would say all the same. Leala had a carefree slant on life and would always live for the moment. Given the outcome, it was a pretty good attitude to take. At 57, my Mum died young – my sister, though, didn’t even see her 30th birthday.

Last Thursday we finally said goodbye to my amazing Mum. At the (packed) Church service prior to her cremation my Uncle Mark and I stood up and said some nice and very true words about her – which was honestly one of the hardest things I’ve ever had to do. I’ve pasted my tribute below. 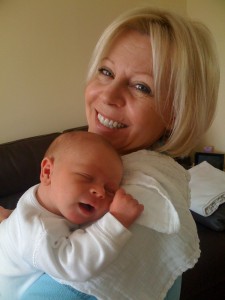 When Mum asked me a few months ago that if things didn’t go to plan with her treatment that she wanted me to speak at her service, I worried relentlessly over what I would say and whether I could ever do her justice.

Once she had passed away, somebody told me that whatever I said would be perfect, because talking about your Mum should be the easiest thing in the World; and as I sat down to write this tribute, those words couldn’t have been truer.

Mum was a truly wonderful person. She was a devoted mother to Leala, myself, Luke & Jamie and also a fiercely proud Gran to my little ones; George and Grace. She dearly loved being a grandparent, and she took to the role effortlessly; regularly exhibiting all of those same protective motherly instincts that I had witnessed growing up.

Unfortunately, there are some things in this life that even a doting Mother can’t shield her children from and Mum’s worst fears came true when my sister Leala was diagnosed with Cervical Cancer in 2007.

During Leala’s illness, Mum was there for her 24 hours a day and 7 days a week. Mum didn’t leave her side throughout her battle which allowed her to concentrate 100% on herself without being troubled by the finer details of her treatment or, later, the burden of knowing when her condition had sadly gone beyond being treatable. Mum, and Dad, took all of that on their own shoulders instead. Caring for Leala made Mum stronger than she’d ever been in her life – not through choice, of course, but by necessity. Throughout all of this though, Mum never complained, and she never faltered. Leala was the only priority.

A mother should never have to out-live her daughter and, predictably, Leala’s death in June 2009 affected Mum profoundly; it sucked some happiness away from her that could simply never be replenished. Leala fought a long, hard battle against her cancer; Mum’s fight was shorter but it was by no means any less brave.

Mum wrote a few months ago that, despite not wanting to leave any time soon, she was no longer actually scared of dying because she knew she’d be with Leala again. Something that’s obviously extremely comforting for us as a family to know.

Aside from being a strong parental figure, Mum was also a great friend. Several people have said to me that without the love and support Mum gave them at certain points in their lives that they would have struggled dealing with whatever events they were going through – and that certainly says a lot about the kind of person Mum was. She would often go out of her way to make sure people were ok and she was always available as a shoulder to cry on or a source of advice. She was the kind of friend that I’m sure we all hope we have.

Of course – as Mark has already mentioned – anyone that knew Mum will also know how much pride she took in her appearance. I remember, as a kid, going to the hairdressers with her and wondering what on Earth they were possibly doing that could take over 3 hours when my haircuts were done in 4 minutes flat. Mum’s desire to look her best was most evident at the height of her illness. When she hadn’t even been out of bed – let alone the house – for days, she somehow still managed to convince her friend June to make the journey to Ingatestone so she could get her roots done. This is despite being told by her oncologist that she definitely wasn’t allowed to! Of course, she got home and was violently ill that day – but this lifelong devotion to looking her best had certainly already paid dividends. People would often look at me in disbelief when I told them Mum was nearing 60 years old and I’ve no doubt that her smile played a starring role in that too. I remember walking past the nurses’ station at St Helena Hospice late one night and overhearing two of the nurses having a conversation about how fantastic Mum’s teeth were.

Mum was a stickler for proper manners and, while I certainly didn’t think it at the time, in later life I’m now very grateful for the training I received at a young age. The reason I instinctively stand when somebody needs a seat, hold doors open and offer assistance when somebody appears in need is all because Mum taught me to do so. At the dinner table, I often find myself telling my own kids to stop waving their cutlery around like flags, as kids tend to do. Mum must have said those same words to me a thousand times growing up, so I guess it finally did sink in somewhere along the way!

Unsurprisingly, I don’t remember the first time I met Mum, but my earliest real memory of her is from when we were living at Riverside Walk in Wickford – I must have been about 5 or 6 years old at the time, so I guess it was around 1986 or 87. And like any good memory of that age it starts with me being naughty enough to receive some punishment. I honestly have no idea what I had done to deserve it – that part is long forgotten – but it was certainly bad enough to warrant a smack on the bottom, which was ok of course back in the 80s. Anyway, I was standing at the bottom of the stairs as my punishment was about to be metered out and as Mum drew her hand back and then swung it in the direction my backside, I decided at the very last second to simply hop out of the way. Mum’s hand crashed into the banisters and she reeled back in agony. I’m not sure who was more horrified to be honest, Mum at realising the backfire or me at suddenly realising the likely repercussions of my actions!

I have no idea if Mum ever remembered that herself or not, but it’s a day that’s stuck with me for over 25 years and I’ve often recalled it vividly. It’s funny how memories work and the things that trigger them. Whenever I hear the song ‘Driving Home for Christmas’ for example, I get flashbacks of sitting in the back of our old Toyota Space Cruiser and Mum humming away at the steering wheel.

But it’s not just the old memories I’ll cherish – I’m lucky enough to have 30 years worth of them. More recently – just a few months ago in fact – Mum arranged for the twins, Adele, little George and I to go to London for the weekend so that George could experience The Lion King stage show; being that he was obsessed with watching the Disney film daily at the time. The memories from that weekend will stay with us all forever – we ate at London’s oldest restaurant and even managed a flying visit to the Natural History Museum. George was absolutely mesmerised by the show and Mum was the happiest I’d seen her in some time as she sat there watching his little beaming face throughout the performance.

A few days after Mum passed away, and we’d tried to explain as best we could to the children that their Gran had now gone to heaven; George turned to us and said that it was a bit like she was playing hide and seek in the sky with us. That’s a lovely way to think about her. We know she’s there somewhere, but we just can’t see her any more.

That follows on nicely to a quote I’d like to leave you all with. It’s from an American author called Helen Keller. She said, “The best and most beautiful things in the world cannot be seen or even touched. They must be felt with the heart”

If, by the end of her life, Mum ended up touching even some your hearts in one way or another – then her life was certainly a successful one.

Mum, we’re going to miss you terribly. When something good happens, it won’t feel quite as real because we can’t call and tell you all about it; and when something bad happens, you’ll no longer be there to comfort us.

But please know that we’ll always love you and you’ll forever be in our hearts. Thanks for being the best Mum we could ever have asked for.